If you’re not sure what this is, check out my initial post describing my “Shooting on a Budget” series.  If you’re already familiar, carry on!

In this edition, I’ll give a few tips on how to take decent photos if the only source of light you have available is the built-in pop-up flash on your camera.

Pop up flash!? For quality photography? Are you serious?

Yes, I am. Bear with me here. I’m sure I’ve divided many of you here. A number of you are likely screaming at your computer, peripherals whizzing past or into your screen as you throw them in an attempt to warn me, “No! Not the photo-ruining laser beam of death!” And others will ask “What’s wrong with the pop up flash? I use that all the time!”  Whichever category you fall into, don’t worry, hopefully at the end of this post, you will look at that controversial little device on top of your camera in a completely new ‘light’. Get it? I’ll see myself out…

First off, for those of you who don’t understand why I refer to the pop-up flash and its notoriety as a destroyer of images, I will give a quick primer on the photographic qualities of light, followed by a real-life example. There are many, many articles already written on this topic, by authors more qualified and more eloquent than myself, so I will be brief. If you’re already familiar, feel free to skip ahead, and if you’d like to read more, there are excellent articles to be found at places like the Digital Photography School.  But as a quick overview; light can be hard or soft.  For simplicity’s sake, let’s just assume that only the two extremes exist.  Imagine the sun when you go outside on a cloudless day during your lunch break.  The light has a very ‘harsh’ quality; shadows are dark, directional, and have very hard and distinct edges, and light areas are extremely bright in comparison.  This is ‘hard’ light. Now instead, imagine walking outside on an overcast day.  Shadows are much less explicit, if present at all; their edges will be fuzzy and gradually fall off, and the difference in brightness between ‘light’ and ‘shade’ is much less noticeable.  This light is much ‘softer’.

Now, both types of light have their place in photography.  It is an art form after all.  But in general, unless you’re going for a specialized look, and want to really accent a certain feature on a subject, or highlight a part a photo, the most sought after light is nice, soft, even light like you would find on that cloudy day.  Softer light will allow us to capture subtle details without blowing out highlights or losing darker areas completely to shadow, and without introducing those knife-edged shadows that can be so distracting and undesirable. There are principally two ways to alter the hard or soft quality of light; the distance between the light source and the subject, and the size of the light source.  The closer the source of light is to what you’re photographing, and the larger it is, the softer it appears, and vice versa.  In the examples above, If you walked outside on that same cloudless day, and the sun were much, much closer… Well, you’d experience first-hand the process of combustion, and probably wouldn’t be taking any more photos. I really need to think harder about my analogies… “You lied to me, then.  The sun is the same size and the same distance away in both of your examples, but the light is clearly different. How is that true?”   It sure is different; what’s happening here is the phenomenon of diffusion.  Light is coming from the sun, millions of miles away, and then striking the clouds before it gets to you.  When this happens, it is scattered, and reflected all around, with some of it passing through, but no longer in a laser-beam like direct path.  As a result of this, light touches objects from all sorts of angles, making the apparent source of light not that little fiery ball in the sky, but instead the clouds themselves, which are much closer and (relatively) much larger.

Now that we’ve thought about light in general, lets take a look at this little flash from a quality-of-light perspective. Its position is fixed, its light emitter is miniscule, and the small reflector housing does nothing to diffuse the light and very little to spread it around and make it ‘large’.  It’s basically a portable sun.  I’ll let you guess what sort of light you’ll get from it. Let me show you a picture taken with this flash. 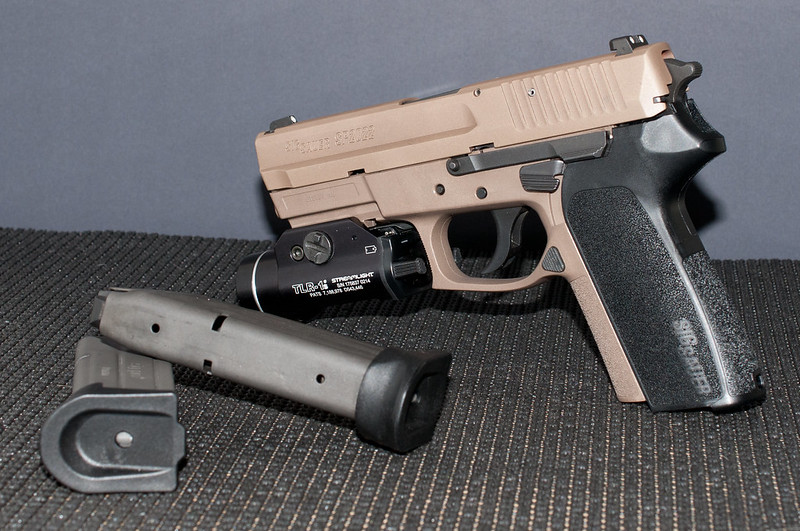 Well, no… You were right; that picture is quite poor. Shadows are incredibly harsh.  Everything facing the viewer is illuminated, but not in a remotely aesthetically pleasing way, and there are ugly, harsh highlights on the rear of the grip. But what can we do fix this? Remember the discussion on light? How can we boost that little lightbulb so it looks like a larger and softer source? We bounce it! By directing the flash away from the subject, we make twofold gains. First, we avoid the “HEAD ON, APPLY DIRECTLY TO THE FOREHEAD” look that results from having a light source directly in line with the camera and lens, and secondly, it gives us flexibility in both the perceived size and location of the light source.  By reflecting that puny beam of light onto a large, white surface facing the subject, the light bounces and is spread around; shadows are softened, highlights become more even and less harsh, and the light just plain looks more pleasant since it appears to be coming from something the size of the poster board. Let’s take a look at the same image as above, this time taken with the flash directed to a large white poster board off to the left, instead of straight at the gun. 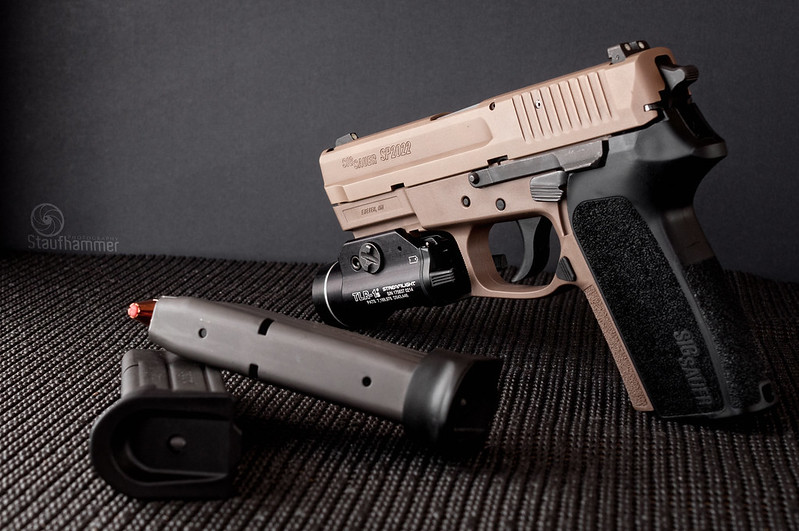 Now that’s nice! Or maybe it’s not. But it’s certainly better.  The shadows have softened, and while the right side of the photo is now darker, this helps to draw your eye back to the firearm itself, and the engravings on the slide.  The shot now has more ‘drama’, due to the actual locations of the shadows from the new light direction, and is much more interesting to look at.  How did I know to put the light to the left? Why not the right?  With the main face of the gun that I wanted illuminated facing to the left, namely the left-hand-side of the slide and frame, I wanted the brunt of the light to fall on these surfaces, making the logical choice to make the light come from the left of the frame.  Had I chosen the right side instead, all of the interesting characteristics on the side of the gun facing the camera would have been hidden in shadow.  It would be a very enlightening experiment if you played around with placing the poster in different locations relative to the camera frame, and witnessing the changes on the overall mood of the resulting photo.  A similar study is how I learned much of what I ‘know’ now.  Perhaps I will write a later post on this topic.

I’d like to point out now that this is not an expensive firearm. This is not an expensive or intricate background or scene.  No expensive lighting equipment is being used (If your camera doesn’t have a built-in flash, keep an eye out for later posts on natural light.  If you can’t afford a couple of sheets of poster board, don’t eat cookies with lunch tomorrow.  Just kidding: eat the cookies, skip the vegetables.). The camera I used is from 2007 and cost me less than an entry level DSLR would today. Many capable cameras can be found at very affordable prices used. Do you see where I’m going with this?  You don’t need to sell your pets to get solid results.

Here are a couple of ‘behind-the-scenes’ photos of how exactly I went about directing the light.  I truly apologize for the potato quality of these photos.  You’d think with the goal of this website, I should be ashamed.

The setup was very simple; my light-direction-device (patent pending), is a sheet of 8.5″ x 11″ white printer paper, folded in half and taped to my camera to deflect the light towards the white poster board on the wall.  The wooden board that you see propped in the corner was just to block some of the reflected light from landing on the black background surface, to keep it darker.

Well, there you have it.  It is possible to use the built-in flash to take reasonable photos, with just a little forethought and … well, craft supplies! I hope you enjoyed the first post in my “Shooting on a Budget” series.  If you have any questions, comments, or critiques, as always, let me know!