One very effective tool for accelerating your growth as a photographer is to find a photograph that you like, and attempt to recreate it.  While this sounds like copying, and in many ways is (I wouldn’t recommend doing this for something you’ll be putting in your portfolio or paid for…), it is also probably the easiest way to learn the techniques and lighting you need to shoot certain styles or ‘looks’.  I have a fairly large folder of images saved on my computer that I’ve compiled to consult for inspiration on days when I’m not feeling particularly creative.  Emulating the images of others makes you really look at and think about a photo.

How did they get this look? What do I even mean by ‘this look’? How many lights did they use?  Where were they placed?  How were they modified? Balanced?  What about this photo really makes me like it? Where are my eyes drawn?

These are all questions you end up asking when going through this process, and if you do this enough times, the things you learn will help you when constructing your own images as well. Additionally, it helps get you out of your own comfort zone, and to try new things, since by definition, you’re attempting to enter and recreate someone else’s creative process.  In this series of posts, entitled Education Through Emulation (ETE), I’ll be chronicling my own experience undertaking this task.

Enough about why we’re doing it, let’s jump into this edition’s photo.  Here is the picture we will be breaking down today:

Disclaimer: I came across this photo a while back and saved it to my computer.  There was no credit to the artist where I originally found it (which, unfortunately, tumblr is notorious for…), a reverse Google image search hasn’t turned anything up, and the watermark doesn’t look familiar.  If you know who the original artist is, please let me know so I can give proper credit!  Likewise, if you are the original photographer and want this taken down, please contact me and I will oblige.

Moving on to the photo itself.  The first thing I notice is that the composition is reasonably pleasing.  A little centered, but the strap of the pack that the pistol is resting on is offset to where a rule-of-thirds line would lie, and the angle of the pistol distracts from how centered the composition actually is. This is pretty solid; I’ll leave it mostly intact as-is.

The next thing I notice is that the light is not incredibly soft, nor is it the harshest I’ve seen.  It falls somewhat in between the two extremes; perhaps from a diffused light source, like a softbox or white umbrella, that is far away, or a close, but poorly-defused light source, such as a hot-shoe flash with a pop-up diffuser.  The shadows below the pistol tell us that the main source of light is ‘above’ the gun in two dimensions; both towards the camera, and ‘north’ of the photo if it were a map.  The apparent softness of the pistol’s shadows, coupled with highlights on the front of the grip, the left side of the strap buckle near the trigger guard, and also shining off of the serial number plate hint towards a second light, but I can’t be certain. Based on the overall character of the light, and the dramatic fall-off into darkness on both the left and right sides of the photo, I propose that the heavy vignetting is from post-processing and not from limiting the light spread.  This helps lead the viewer’s eyes to the pistol in the center and lend an air of ‘drama’ to the photo, but is just slightly overdone in this application, in my opinion.  It appears that other post processing was also done to increase the microcontrast or ‘detail’ amount, which is apparent by looking at how clear each individual thread in the backpack fabric stands out.

Alright, my turn. I don’t have a Glock 17 available, so I grabbed the closest thing I had; a Glock 32 with a 9mm Lone Wolf conversion barrel. After learning first-hand how difficult it is to get a pistol to stay in that orientation on an empty backpack, I finally get some test photos snapped with a single light source.  I wish I had remembered this time to keep a couple of these test photos to post them here, but it slipped my mind; in the future I will hopefully have examples at each step so you can follow along through the process.  For my first light placement, I placed a hot-shoe flash on a stand so that it was approximately the same height above the scene as the camera, but far enough ‘north’ that it was aimed downward at the Glock at a 45* angle.  Test shots revealed that the placement was fairly close to the photo being emulated, but the character was much too harsh.  This was remedied by shooting the flash in the same position, but through a white diffuser umbrella. Much better; now we’re getting there.

After this change; the main things the photo lacked were details on the ‘undersides’ of the pistol, such as the rail area, under and inside the trigger guard, etc., from the lack of light reaching those areas.  Likewise, the highlights on the front of the barrel, the top round of the magazine, and front strap of the grip aren’t quite as pronounced as in the original photo. To combat this and try to regain these highlights, I placed a softbox’d flash ‘northwest’ of the scene, at approximately the same height as the gun, and then tweaked the height and angle until the desired highlights ‘popped’ without too much fill light hitting the backpack itself.

Overall I took the photo in a slightly different direction by softening the light somewhat, cropping in closer, and arranging the gun at a slightly different angle.  This was partially because the gun I used was smaller, and partially because I was working mostly off of memory to recreate the shot.  The end result is still a photo that pays homage to the original, albeit with a somewhat different tone.  In post processing, I didn’t take as extreme of an approach with burning the edges, and also didn’t boost the microcontrast as much, so that the photo would flow more nicely with the softer lighting that I used.

TL;DR: Flash with a white umbrella above and ‘north’ of the gun to provide the main light, with a softbox’d flash to the northwest for accent highlighting and to fill in certain shadows on the underside of the gun.

Here is the final photo: 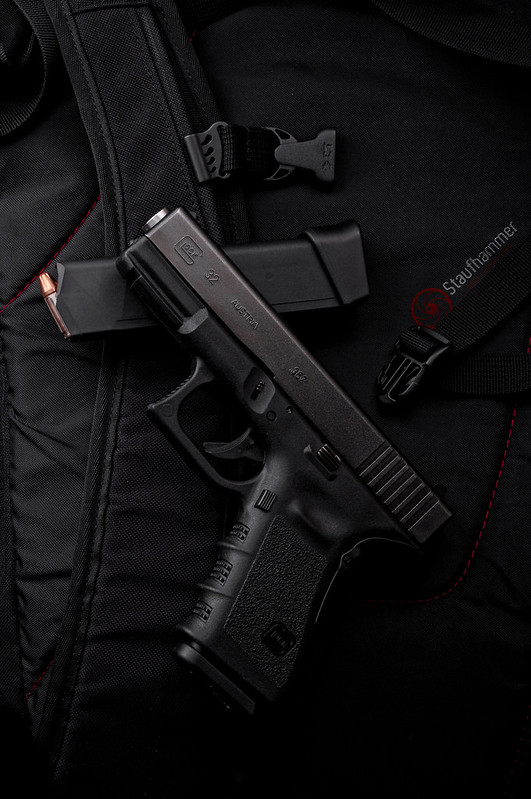 From here on I will have an accompanying photo of the lighting setup, as a behind-the-scenes peak, but I apologize that I didn’t take one for this first post.

As always, I’m no expert.  If you have any comments, criticism, critique, let me know!  I’m always trying to learn.

Like what you see but have run out of content?  You can head over to my Flickr page for more pictures that aren’t all posted here.