If you’re new here, check out my Budget Series Pre-Ramble and the first post in my Shooting on a Budget series, where I demonstrate one way to take decent photos with the on-board pop-up flash that comes on most DSLRs and ‘bridge’ cameras, and even some point-and-shoots.

If you’ve already taken a look at our initial look at the pop-up flash, you’ve seen a small taste of what you can do in photography with just a little creative thinking.  In this edition we’ll be revisiting the pop-up flash, and again using our trusty white poster-boards as reflectors. However, this time going for a much different look.  Instead of trying to create an image with some drama  from side lighting, we’ll be going for that high-key product photography look that utilizes an ‘invisible’ white background.  To get this we’ll need a whole lot of light, that seems to be coming from everywhere, so there are no shadows.

Usually, this type of shot is taken with either a light tent, or a seamless backdrop with a number of heavily diffused light sources.  A light tent is basically a translucent cube that you place the product inside and then shine light at from a number of angles.  The material of the cube then diffuses the incoming light and it appears to surround the product with nice, soft, diffuse light, while eliminating shadows. In later posts I will cover the latter technique mentioned for taking this shot with heavily diffused off-camera flashes.

But we don’t want no stinkin’ light tent!  We want to use our pop-up flash!

Just like last time, we’re going to bounce our little pop-up flash off of something to make it seem like a much larger source of light.  If you’re not sure why we’re doing this, check out the first post for a short discussion on light qualities.  For this style of shot we really need the light to look huge.  I mean Billy Fucillo huge.  And we also want the light to cover everything in the frame evenly, so directing it off to the side of the frame isn’t a great option for us here.  My first thought was to try bouncing the flash off of the ceiling – it’s large, white-ish, and flat.  Everyone has one, so it’s very accessible.

I tried it, taping a piece of folded printer paper to the camera to deflect the light of the flash at my ceiling.  The results were reasonable, with one huge caveat – the main issue I encountered was that the color of my ceiling is too far off white to use as an effective reflector. It threw all of the colors in the frame out-of-whack with a yellow tint.  Some work in post-processing might have made this salvageable, but there were also some visible, harsh shadows due to the sheer distance between the ceiling and the gun.

To fix both of these issues simultaneously, I instead set the camera on a delayed timer – After depressing the shutter, I grabbed one of my handy white poster-boards and held it directly above the camera, curved like a rainbow, to try to ‘surround’ the gun with reflected light.  This eliminated the white-balance issue because the poster-board is closer to true white than my ceiling, and it also eliminated most of the visible shadows by ‘moving the ceiling’ much closer to the scene, causing the light to appear much softer.

Here is the result! 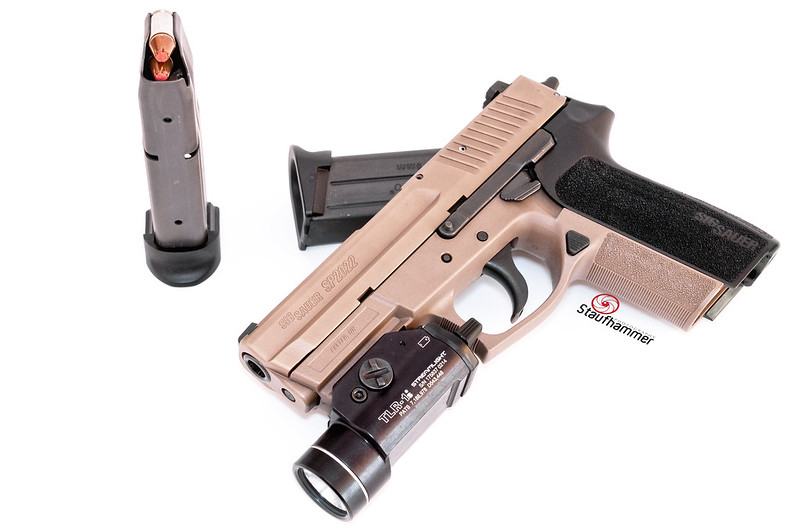 And a few rough behind-the-scenes glimpses:

All in all, I’d call this another successful budget shoot – with a result punching far above it’s pay grade.  As with the last Budget post, the main things you need to recreate this photo are a DSLR (or really any camera with manual mode and built-in flash), some posterboard, and a firearm!

Stay tuned for the next post in the Budget Series, where I’ll take a quick look at cell phone photography!