I was forced to neglect the site for a while due to finishing up my graduate studies, but now I’m back, and recently had the opportunity to do a small photoshoot for a local firearm dealer.  I’ll be posting a few of the photos from the shoot over the coming days, but first up is a very cool little pistol I had a chance to ‘shoot’; a 1915-manufactured Colt Model 1903 Vest Pocket pistol, chambered in the diminutive .25 ACP! 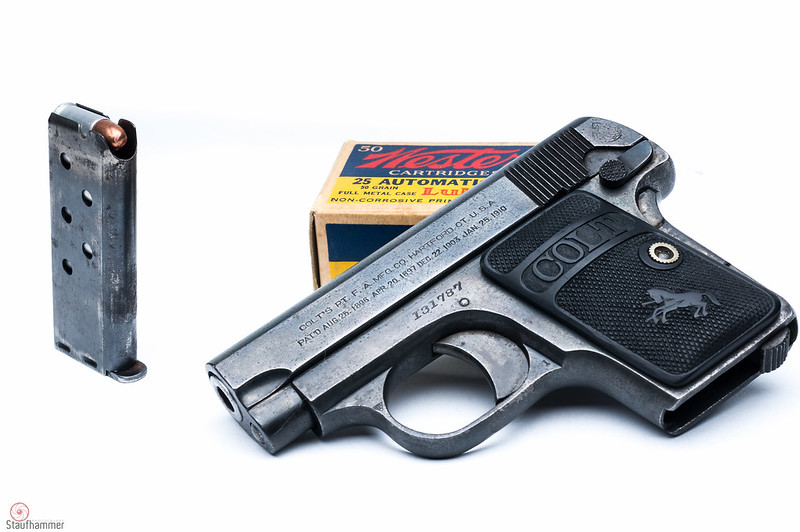 This is my favorite shot from the set. This gun wasn’t the main focus of the shoot (which you’ll see later), so I only had it out for a few minutes, and didn’t grab too many different angles, but was very happy with how this came out. The pictured magazine is original, and you can really see the new-life that was recently breathed into this particular firearm. For being almost 100 years old, it looks great! 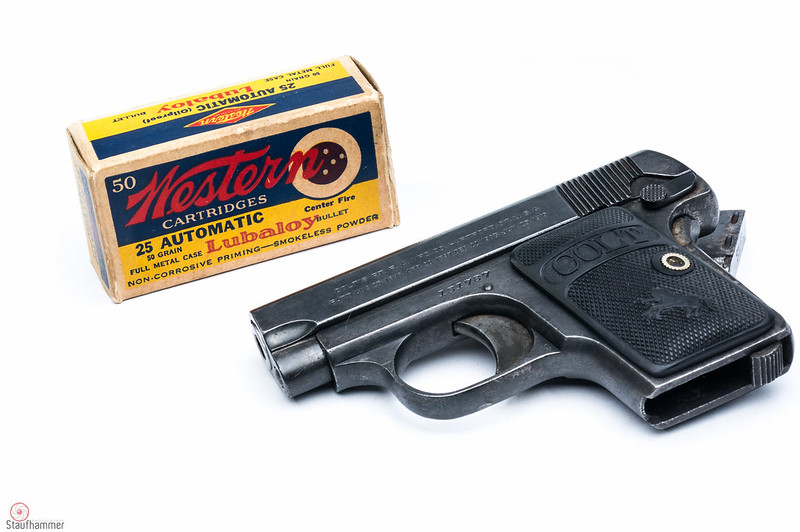 When the owner first came into possession of the gun, it was quite rusted and pitted, and the original factory bluing was worn down to approximately 20%. After completely stripping down the gun, replacing the worn, original springs with a new set from Wolf, and tracking down a replacement for the broken firing pin, he finished stripping off the original bluing, and after some polishing to remove the worst of the rust and pitting damage, started from the ground up refinishing it. After 12 applications of Miracle Products International’s hot salt bluing, and a generous afternoon (or two) of polishing, the gun was re-assembled with reproduction Colt grips to create the beautiful tool you see here. 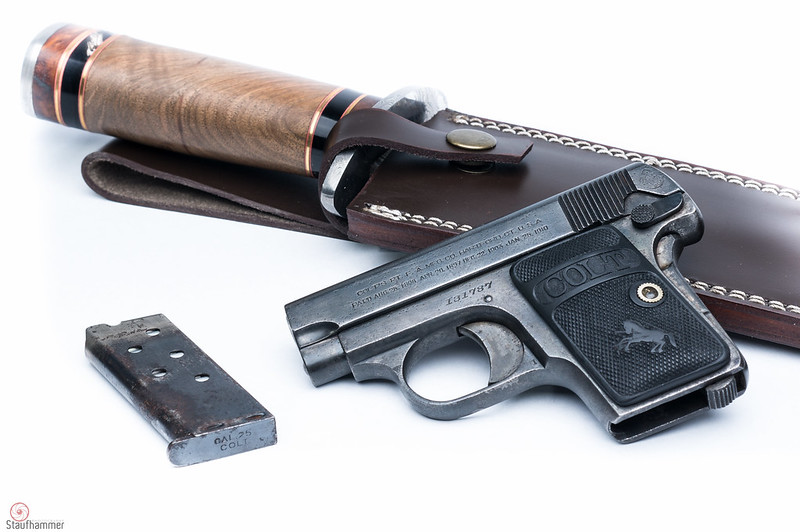 The pistol itself is very interesting, being a striker-fired single-action design by the ubiquitous John Moses Browning, it was related to Browning’s earlier design (produced in Europe as the FN 1906), and marketed as a tiny and unobtrusive option for concealed carry. It holds 6 rounds of one of the smallest centerfire cartridges produced, .25 ACP, which was also invented by Browning. The manual of arms for this tiny handgun is almost identical to a 1911, if only a 1911 were missing it’s hammer; featuring both a manual, slide-locking safety, and a grip safety. Boasting a 40 year production run from 1908-1948, over 400,000 of these little guys were produced in total.

Lighting for this photo was provided by a single 100 watt strobe head directly over, and very close to the firearm, with a double-diffused 20″ x 28″ rectangular softbox to create the flattering, soft light you see. The ‘infinite white’ background is created by a roll of white craft paper hung behind the scene, and adjusting the whites-clipping in Lightroom 5 until the paper was detail-free. This particular photo was shot with a Sony NEX-6, using an adapted manual focus Pentax-M 50mm f/1.7, at 1/200s, ISO 100, and f/11.

Stay tuned for more photos from this shoot!