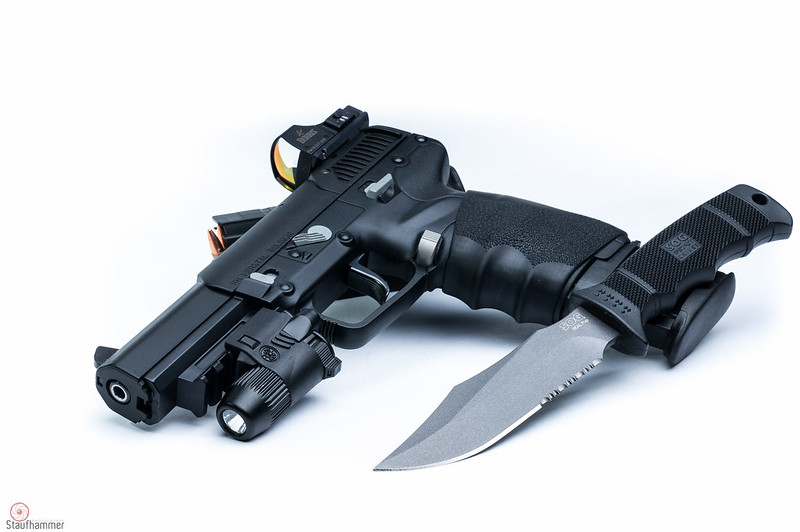 Ah, the FN FiveseveN.  Cramming 20 rounds of what essentially amounts to a .22 on a massive amount of steroids into each magazine, this is a truly unique firearm that I’ve personally been intrigued by since it was introduced to Counter Strike back when CS first became standalone.  A Belgian design by FN Herstal, this pistol is unique in that it heavily features polymer in its construction; even its slide appears to be polymer!  In actuality, it is a steel slide wrapped in a thin polymer shell.  This not only affords the pistol another layer of protection from external wear, but more importantly helps to keep the weight down; both the overall weight and the reciprocating mass that is forced to move back and forth incredibly quickly each time the gun cycles.  The most notable and significant effect that this slide lightening has on the end user is that it allows the recoil impulse of an already comfortable cartridge to be even softer, but anyone carrying the gun regularly will appreciate the fact that the fully-loaded full-size pistol weighs a scant 1.6 lbs.   Each Five-seveN is hammer-fired with a fully enclosed/hidden hammer mechanism, an ambidextrous safety in a unique location that’s easier to manipulate with your trigger finger than the thumb that most shooters are used to swiping the ‘go switch’ with, and newer models like this one are single-action with a nice, crisp trigger pull right around 5 lbs.  This all comes at quite the price, though; with the pistol normally selling for around $1200. Yikes.

The 5.7x28mm ammunition fired by this weapon is interesting in-and-of-itself.  Featuring a low-mass (and I mean low; just 27 gr for the ammo most available to civilians), .22 caliber projectile fired at a very high speed (~2000 fps), the round was originally developed as a potential replacement to the 9x19mm cartridge for NATO with the ability to penetrate certain types of body armor (though these specific cartridges are available to law enforcement only). With its small-diameter projectile and bottlenecked casing, the round will typically allows a high magazine capacity, and as you may have guessed, is also light-weight, allowing approximately twice the number of rounds of 5.7x28mm for a given weight when compared to 9mm.  Also from FN, the P90 bullpup-style PDW is famously chambered in 5.7×28 as well, making a perfect ammo-sharing loadout for law enforcement and military users seeking armor-piercing and high-capacity capabilities. 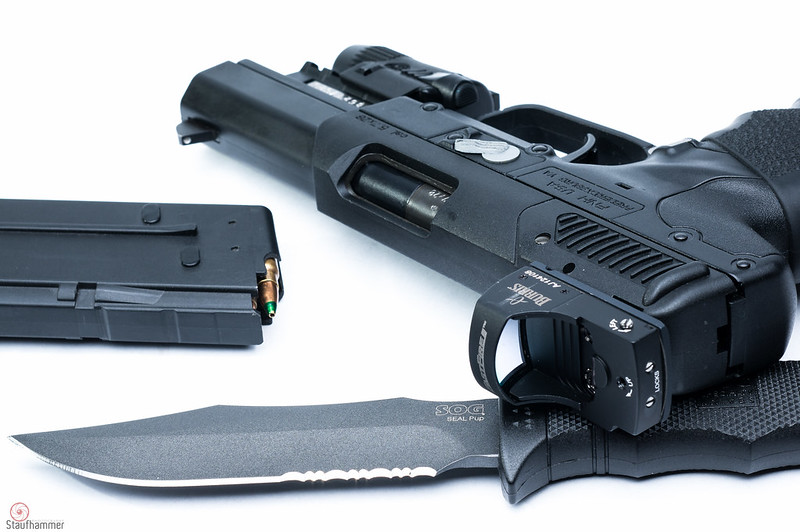 This particular firearm is a Five-seveN USG model (distinguished by its square trigger guard, the fact that it is owned by a civilian in the US, and its lack of the front cocking serrations that set the newer Mk2 model apart), and also belongs to the FFL who restored the Colt Model 1908 Vest Pocket that I featured here last week.  To adapt the Five-seveN more to his needs, he has added a Hogue rubber grip sleeve, an extended 30-round magazine, and a Smith & Wesson weapon light.  To top it off and round the pistol out for the ultimate upgrade in point-and-shoot-ability, the rear sight has been replaced with a mount for a Burris Fastfire red dot reflex sight.  Also present in the photo is the owner’s SOG Seal Pup knife. 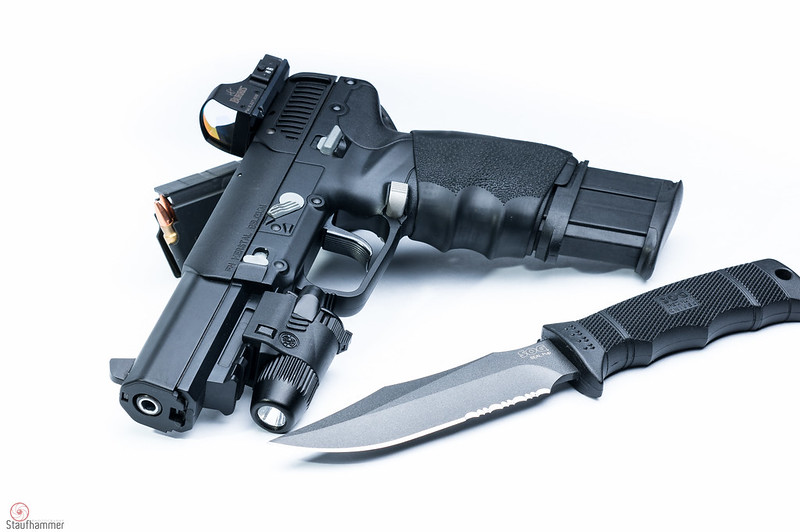 Like the Model 1908, this image was created with a single 100 watt strobe head directly over, and very close to the firearm, with a double-diffused 20″ x 28″ rectangular softbox to create the flattering, soft light you see. The ‘infinite white’ background is a roll of white craft paper hung behind the scene, and is helped by adjusting the whites-clipping level in Lightroom 5 until the paper was pure white and detail-free. This particular photo was shot with a Sony NEX-6, using an adapted manual focus Pentax-M 50mm f/1.7, at 1/200s, ISO 100, and f/11.

I still have a few more of his firearms that I’ll be getting to in the coming week. To check out a couple of more pictures of this Five-seveN in the mean time, check out my Flickr or take a look at Aesir Tactical & Armory’s website for your FFL needs.